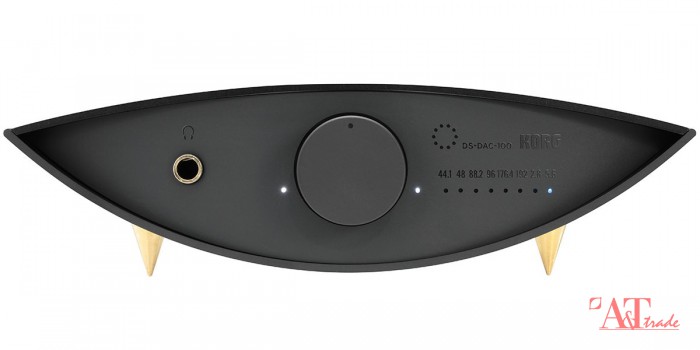 If we're talking about beautiful sound, we also want the appearance to be beautiful.

Leave behind the bustle of everyday life, and spend a holiday afternoon deeply immersed in the music you love. Audio equipment lacking a professional aesthetic is not going to transport the listener to a world that's distant from reality. The DS-DAC100 is housed in an elegant and curvaceous body, with a simple front panel with a volume knob, LED indicators, and a headphone jack. The influence of vibration is minimized by a bottom panel with gleaming metal spiked feet (as found on other high-end audio equipment).

In response to numerous requests from audio aficionados and studio engineers, we've provided XLR connectors for balanced outputs as well as RCA outputs.

Simply connect the DS-DAC-100/100m to your computer via USB cable, and you have a high-quality audio playback system. The system consists of AudioGate 3 software that plays back audio material from your computer with the best possible quality, together with the DS-DAC-100/100m which converts the data from AudioGate 3 into an analog signal for playback through your headphones or speaker system. When it comes to high-quality playback of computer audio, the software and hardware are equally important; if either is lacking, you can't expect optimal audio quality. With its long history of developing both software and hardware that meets professional demands for quality, KORG was uniquely able to create this ideal music playback environment.

Accurate real-time DSD-analog conversion is the secret to high-quality audio playback through headphones or your high-end audio system. Audio files such as MP3 and WAV from your computer (even a CD!) can be converted to 5.6448 MHz/DSD data in real time and played back by the dedicated AudioGate 3 software. Since conversion to ultra-high quality DSD data is impractical for stand-alone hardware due to the enormous amount of processing power that is required, the power of your computer is used to perform this task, extracting the maximum information from the musical source before sending it to the DAC. The DS-DAC-100/100m, takes the audio optimally designed for DSD, then converts the data to an analog signal for the ideal audio playback scenario. You might even start hearing new details in your familiar CD or MP3 collection that had previously been hidden in the mix.

KORG was among the first audio companies to focus on the high sound quality benefits of DSD, using DSD as the recording format for the highly acclaimed MR series of studio and field recorders. Now that major music distribution sites such as Blue Coast Records and Channel Classic Records have started distributing data in the DSD format, and major audio manufacturers have also started to release USB DAC units, the DSD format has become acknowledged by audio fans as a synonym for the utmost in high-quality playback. The quality of this DSD data is fully realized by the "DSD native playback of DSD data" offered via these USB DAC units, the DS-DAC-100/100m. These units support playback not only of 2.8224 MHz DSD data but also the still higher-resolution of 5.6448 MHz, which is even more faithful to the original source.

The data is conveyed via "asynchronous transmission," which does not synchronize with the USB clock of the computer, thus allowing high-quality playback with minimal jitter.

The DA converter uses the CS4398 made by Cirrus Logic, the same reliable and ultra-high-quality component that can be found on the MR series devices. It provides performance equivalent to that of the MR-1000, an acclaimed standard in professional studios and as a field recording device, providing high quality that exceeds other units in its class.

In this way, the DS-DAC-100/100m has been designed with painstaking detail and with the highest specifications for every part of the system.

The data on the computer must be conveyed to the DS-DAC-100 unit with as little loss as possible. KORG has developed native drivers to implement truly native playback of DSD data, where the data is conveyed via the USB cable while still in DSD format and then DA-converted within the converter unit itself. To ensure trouble-free compatibility between the playback software and the DAC, we have taken advantage of our many years of experience with DSD data to create drivers that deliver stable operation and the highest-quality playback on both Windows and Mac.

Why does the AudioGate system sound better?

The AudioGate software uses the power of the computer to perform the calculations necessary for D/A conversion, as opposed to slower external hardware. This allows for ideal processing, retaining the audio’s original quality.

By developing both the application and the USB-DAC, Korg is able to ensure comprehensive audio quality, even on up-converted file formats.